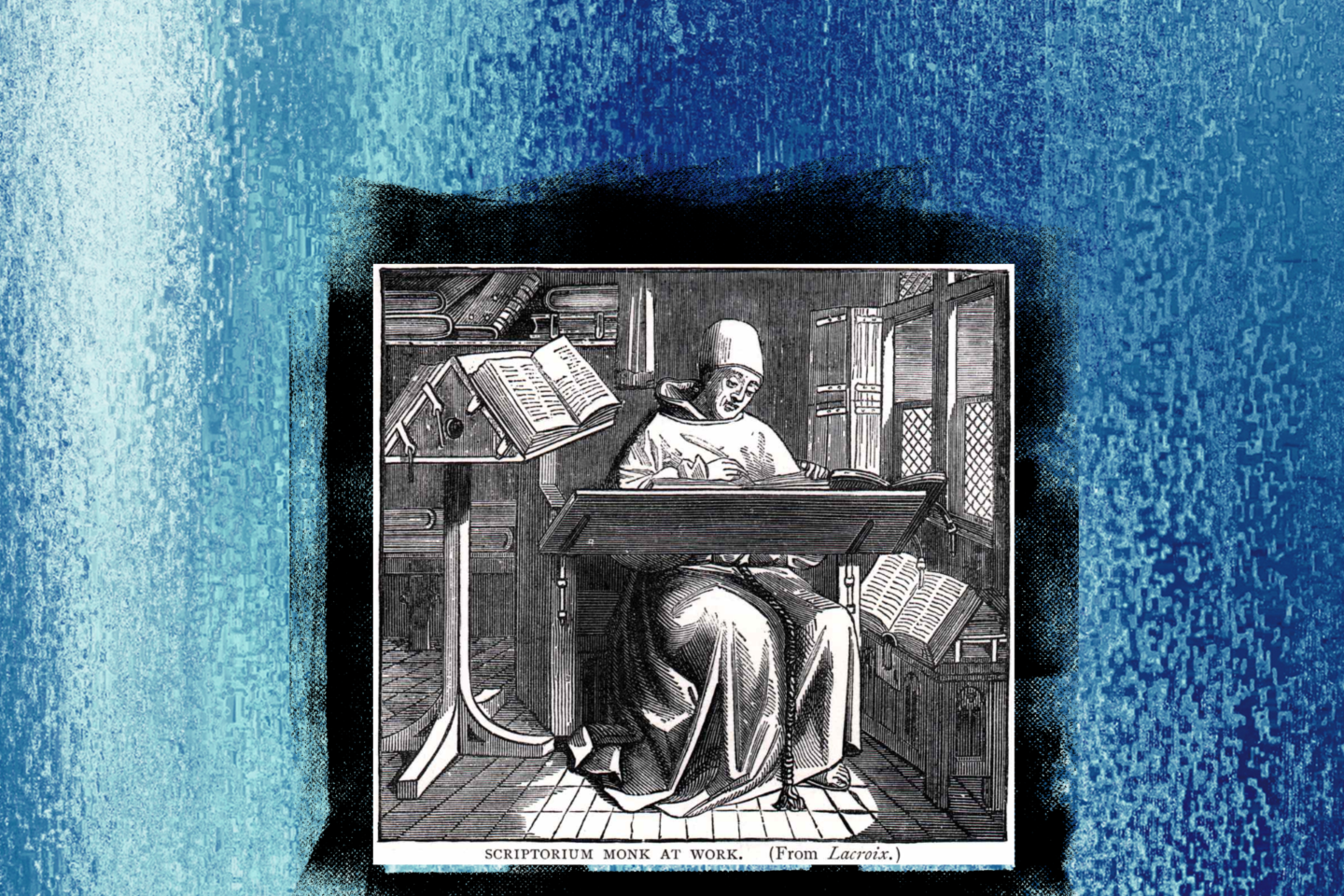 Bede was a Northumbrian monk, he was born around 673 and he died in 735 AD. He is the only Englishman to be named a Doctor of the Church, a title conferred onto him by Pope Leo XIII in 1899 for Bede’s contribution to theological writings. Often referred to as ‘Venerable’ – this is the first of 3 stages leading to canonization. Bede was never formally canonized as a Saint, quite often the development of sanctity in the Early Medieval period depended upon local interest.

Indeed shortly following his death, Bede came to be regarded as a saint. In 836 at the Council of Aachen in he was described as an ‘honourable and admirable teacher and was considered to be an equal of the Church Fathers. (Monumenta Germaniae Historica, Concilia, 2/2, 1908, 359). The popularity of Bede and the cult surrounding him only intensified during the revival of monasticism in the tenth century. In the 14th century, Dante had Bede in paradise sitting next to Isidore of Seville.

Bede entered Monkwearmouth monastery at the age of 7, he was entrusted by his relations to Benedict Biscop, Abbot of St. Peter’s monastery, Wearmouth. Bede remained at the monastery of Monkwearmouth and the nearby sister monastery of Jarrow until his death. Bede would have been given to the monastery as a child oblate. The word oblate comes from the Latin oblatus – meaning someone who has been offered. In the early middle ages, the connotation was someone offered to God.

Interestingly, a church council held at Toledo 24 years earlier (656) had forbidden the acceptance of oblates under the age of ten. However, the practice of giving children to a monastic house continues throughout much of the medieval period.

Bede was ordained a deacon at the age of 19 and ordained a priest aged 30.

Bede tells us very little about his family background. It is highly likely that he was from an aristocratic family. In the Early Medieval Period, monks who entered into a monastery had to bring with them some form of wealth, like a dowry. This was in order to support the monk financially during his time at the monastery and to enhance the wealth and prestige of the monastic house.

Monasteries had international visitors, they were centres of culture and learning. They would have been lavishly decorated and have been an attractive lifestyle. indeed they had to make these places attractive in order to attract their intended aristocratic recruits. The double monastery of Monkwearmouth Jarrow was also rather large. When Abbot Ceolfrith left for Rome, in the early 8th century, he left around 600 monks behind and took with him 80.

Bede’s day would have revolved around the divine office and these formed the structure of the day. The monks would Pray, sing psalms, and study throughout the day. They would have also undertaken physical labour, this was an important opportunity to test one’s humility. If a monk had a particular talent, this would have been developed. for instance, Bede clearly had a particular talent for writing and so he would have been allotted time for study and writing in the scriptorium. writing itself was a way of praising God – by producing such beautiful pieces of literature which honoured God and spread his message, this was also an act of prayer and devotion.

Bede had access to one of the most impressive libraries of his day. We often think of libraries as housing thousands of books. Early Medieval libraries were much smaller than our modern-day ones. The library of Monkwearmouth-Jarrow houses around 150 books from 70 different authors. Although this might seem like a relatively small library, it would have contained all the books required for a monastic education. Books from the classical period, the early Chrisitan authors and the Church Fathers. There would have been books on science, music, law and history.

It was amongst this culture of learning and in the splendour of the monastic environment that Bede put pen to paper, or quill to parchment in the 5th decade of his life. He authored many books, indeed he lists over 30 books that he authored. These ranged from an English translation of St John’s Gospel, a series of ‘textbooks’ on grammar as well as over 20 books on Biblical commentary. But what Bede is most famous for is his composition entitled ‘An Ecclesiastical History of the English People.’ Bede completed this monumental work in 731.

Ecclesiastical History of the English People

Bede opens his work with a vivid description of England. He describes the land, the geographical features, and starts his story with the arrival of Julius Caesar in 55BC. Bede ends his book with his own day and describes the dispute that arose regarding the correction dating of Easter.

The text is divided into 5 books chronologically ordered:

Bede’s work gives us much of our knowledge about the Early Medieval Period in England. the significance of his work cannot be underestimated. Bede’s work survives today in around 160 manuscripts that were created during the medieval period. This is an incredibly high number of manuscripts – by comparison, only a single manuscript survives of Beowulf. On the continent, 8th-century missionaries asked for copies of Bede’s work to use for the conversion of Germanic peoples. A copy of The Ecclesiastical History of the English People held at Cambridge University was written within 10 years of Bede’s lifetime. This demonstrates just how popular Bede’s work was in the immediate years following his death.

Bede’s work contains the only information we have regarding some events. He includes personal information new simply do not get from any other sources. for instance, Bede’s famous passage regarding the conversion of King Edwin of Northumbria.

The Father of English History?

In this work, Bede attempts to create a description of the development of the English people using a Christian framework. The word ‘English’ needs to be clarified here. In the 8th century, England was not a kingdom, but a conglomerate of kingdoms.

The kingdoms on the map which are labelled red are those kingdoms held by the Anglo Saxons. Those in grey are those of the Celts or the ‘Britons’ and those in green are the Picts. Bede resided within the mighty kingdom of Northumbria which was the most powerful kingdom of its day. Many of the Anglo Saxon kingdoms had been converted to Christianity by Bede’s day. But some did remain pagan. Each kingdom had developed their own customs, having assimilated and amalgamated with the existing Romano British population when they had arrived. However, the Anglo Saxon population of Britain shared a common ancestry – the Germanic tribes. They had fought off or conquered the Britons (the Romano-British) in the 5th and 6th centuries. And now they were creating their own identity – the English identity.

Bede told the story of Britain and in particular, the development of the English nation through the framework of Christianity. He used the conversion of the Anglo Saxon pagans to Christianity as a unifying process. Thus, according to Bede, England and Englishness developed as a result of conversion to Christianity.

Bede, The Ecclesiastical History of the English People.

See the Internet Archive for works on Bede.